There is a number of infotypes in SAP which are local to some country. SAP doesn’t provide any standard solution to send these country-specific or custom infotypes over ALE, cause standard IDOC contains only international infotypes. If you develop your infotype and want to send it over ALE there are some tips and tricks to handle. Today I want to tell you how to send custom infotype or country-specific infotype over SAP ALE. It’s going to be a long tutorial with a lot of images. More than I’d like to show you what is a short and long infotype record in terms of SAP integration and IDOC structure. And, of course, ABAP source codes will be provided for your convenience. Take a cup of coffee and join me with this unique tutorial never been shared before.

To add custom infotype to a standard HRMD_A IDOC in WE31 transaction create a new segment to include it into IDOC and send over ALE. Naming rule is Z1PXXXX, 7 symbols. It’s done for prior 4.6C compatibility, so if you work with modern systems you can use longer names. The first three letters ‘Z1P’ is a must. To save time and avoid human mistakes typing all SE11 fields into segment manually you can create a segment from a template. In menu Segment -> Create with template choose DDIC structure and type in PXXXX, where XXXX is your infotype code. When you save segment systems checks its length to comply with 1000 IDOC segment length.

In my scenario, I’ll use country-specific infotype 0293. Here is how it looks like in segment. 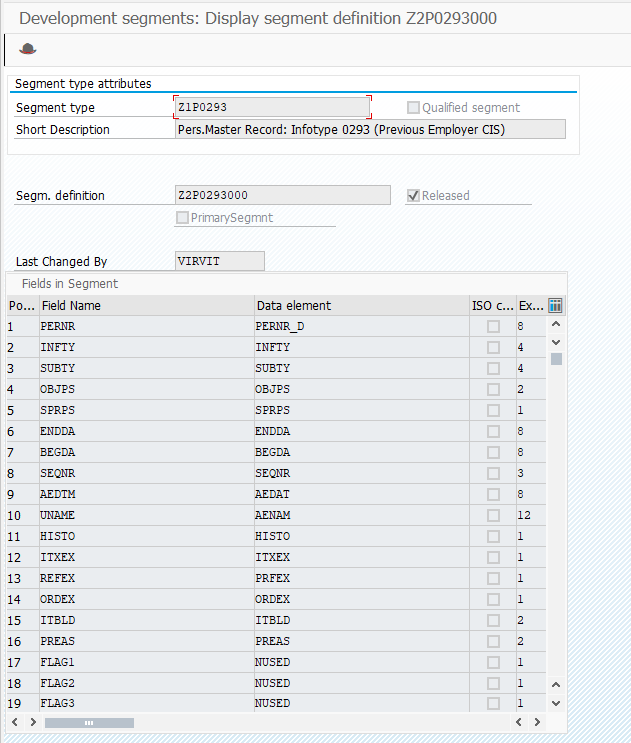 Don’t forget to release the segment in Edit menu.

END_OF_DOCUMENT_TOKEN_TO_BE_REPLACED

So we have standard infotype which is not shown in PPOME transaction. We want to add standard infotype to PPOME tab to help users enter data. Let’s take infotype 1039 “Shift group” for our example. Usually, we use it for shift planning in time management (transaction PP61). It’s recorded for Organizational units (object type “O”). So it’s easier to enter this infotype in PPOME than in PP01 as SAP advise.

There are three steps to make it happen. We need to create a new screen, it’s logic and enter it in customizing tables.

END_OF_DOCUMENT_TOKEN_TO_BE_REPLACED

Test procedure – subtype of 130’s infotype. Infotypes are assigned to test procedure. For example, “Time data” test procedure with 7, 2001, 2002, 2003 infotypes could restrict access to previous records. Just to avoid any changes in history.

The procedure itself is quite easy. It’s need to create 130 infotype with correct subtype – test procedure – for employees whom you need to restrict history data change. Let’s say it’s May 1st is entered into infotype. It means data before May couldn’t be changed for time infotypes (in case you set Time test procedure).

You’d better to use LSMW to create infotype 130.

To lock or unlock data entry in mass use RPTAPPU0 program.

Advice. To setup procedure don’t forget to add infotype 130 into P_ORGIN object in your roles. And split it by subtypes of 130 infotype. Everybody entering time data should have read access to 130 infotype. Administrator should have change access.